Hamama – Art That Came to Life at Belgravia II 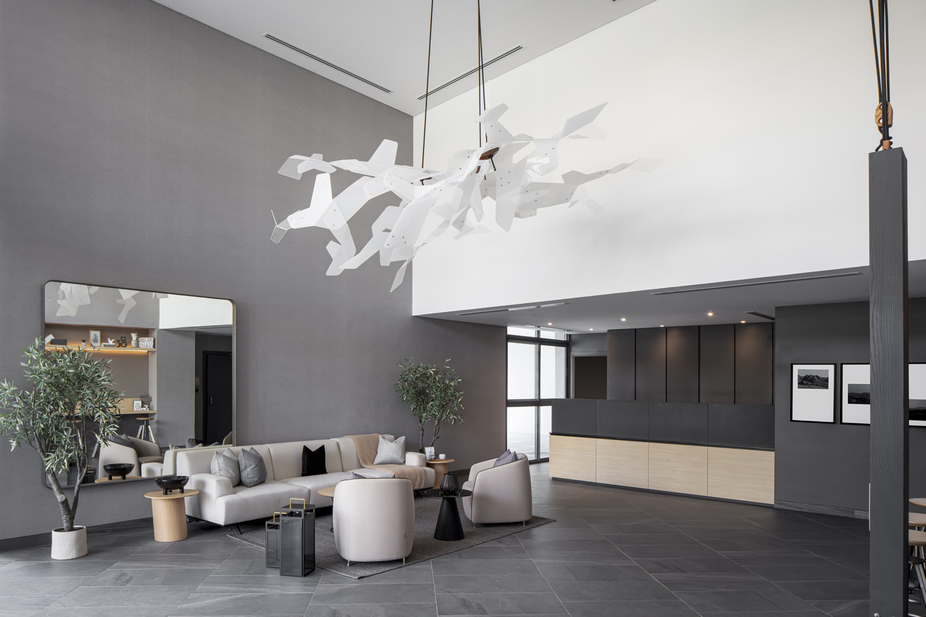 At Ellington Properties, we recognize the value art adds to a project. Through the Ellington Art Foundation Initiative, we aim to support the local art community through collaborations to produce unconventional, contemporary art pieces. From paintings to photography, visual arts, and installations, Ellington Properties appreciates all artforms.

Ellington Art Foundation collaborated with Professor Juan Roldan, Professor Camilo Cerro, Ms. Reema Chalha, Ms. Sana Fathima and Ms. Mariam AlJuwaied from American University of Sharjah. They were commissioned to create an art installation, called “Hamama” for Belgravia III‘s lobby. Hamama is an organic expression of a controlled agitation of this flock of doves, which sprouts from its core, framing the lobby lounge, and adding depth and dimension to the space.

The process included a lot of trial, error, and experimentation, as Hamama is an intricate, detailed art piece. Firstly, they began trialing with different materials and techniques that defied the conventional. However, they had to appeal to the site’s meaning and style. Subsequently, three separate project ideas were created. Each one of them, experimenting with different forms, materials, and sizes. Finally, a concept was selected after close consideration, and the chosen proposal used a monochromatic color scheme to express frozen dynamism.

Hand drawings, sketch models, 3D digital modeling, parametric algorithms, and mock-up modeling were used in the extensive design phase. This continued until a flexible architecture was built from a single unit that can be assembled into a transformable module. Furthermore, several versions of the unit were created with a scale and color hierarchy, then heat-bent into complicated shapes. This was to create a multi-dimensional representation of a flight of doves photographed in mid-flight. Joined together, they form the final structure of Hamama.

The art piece is made up of three layers, which have been heat bent into dynamic shapes and linked with other units, generating an iterative module. The central module in the system uses 8mm thick units, which then branch out into thinner 6mm and 4mm sub-units. Moreover, the frosted primary units bring visual sophistication to the piece by allowing light to bounce off and cause dynamic reflections. The transparent secondary units add subtle texture to the installation by connecting to the ends of the primary units and emphasizing the frozen movement. Metallic fasteners bind the heat bent parts via a four-point delivery mechanism between the ‘wings’ of the pieces.

The way Hamama is suspended from the ceiling is through a robust pulley and wooden counterweight system. This contracts the fluidity of the acrylic to create an over-all balance between the art and the mechanism. Three black ropes are strung through the acrylic composition and secured to a large wooden stopper. Thus, distributing the suspended weight and securing the attachment inside the counterweight.

The wooden floor-mounted counterweight was intended to work as an autonomous sculpture. However, also acting as a counter-load to mechanically lower the sculpture for annual maintenance. The counterweight was made to allow a single individual to quickly float down the 50 kg sculpture. This is done by opening the padlock at the back of the sculpture and unraveling the rope. Thus, this raises the upper wooden section from the floor mounted anchor to float 1m off the floor.

Hamama received an award by Harpers Bazaar Arabia for Best Collaboration during The Sixth Edition of Bazaar Interiors Awards 2020.  Furthermore, Hamama has been mentioned in several magazines across the region. Awards ranged from Gulf Business, Gulf Today, Zawya and more, recognizing the creative and unique aspects of the installation.